Spring is the time of plans and projects.

With Spring hurtling towards us, the weather (hopefully) picking up and all the great things that come with this time of the year. We have been doing some thinking and tinkering behind the scenes. With so many beer styles and breweries around at the moment we have decided to add two new hand pumps!

This will allow us to promote new breweries and new styles without upsetting the balance. The other good news is in addition to the new pumps we will also be adding a new keg tap. As the keg market continues to grow (especially the mighty keykeg – if anyone is interested in this tech I’ll post a separate blog about it) we want to bring you the best in local and far flung beers and styles and the third tap helps us achieve this. The beer lines will be changed and the current beer engines will be serviced, so we can continue to serve top notch fresh beer!
The good news doesn’t stop there! We will also be updating the seating arrangement in the bar and a general tidy up will be happening paint etc.
We will be hopefully getting some great breweries in for our ‘Meet The Brewer’ events and also our first ‘Versus’ night and tasting session!
Also hopefully by the end of spring we are hoping to boost the community aspect of the place. We are hoping to do some bikes rides and brewery tours and all sorts of things to help bring people together.
It’s been a crazy few months and we can’t thankyou enough for all your support and high fives.

February 3, 2016 By Phil Cunliffe in Uncategorised 0

Thornbridge Take Over The Firkin

The mighty Thornbridge Brewery are taking over ‘The Firkin’ for one night only! We will have 6 of their most fantastic beers on our lovely handpumps for you to enjoy! 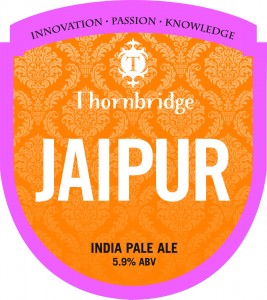 Back in 2014 we scooped an award from our local CAMRA branch and The St. Helens Reporter popped down to talk to us about it…

TWO ale enthusiasts who brought the modern atmosphere of an urban beer bar to Newton-le-Willows are celebrating a CAMRA award.

Brothers Dan and Phil Cunliffe opened microbar The Firkin on High Street last October and have made an immediate impact among ale drinkers, with the South East Lancs (SEL) branch of CAMRA giving them the prize for 2014’s best new cask ale outlet.

Dan and Phil created The Firkin after enjoying the lively ale scene in cities like Manchester and Liverpool and wanted to bring the same approach to their hometown. 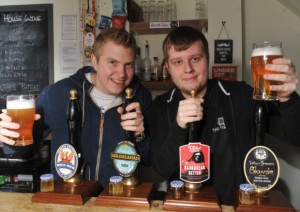 The duo’s popularity is based around having a wide range of high-quality ales available, with The Firkin’s six handpumps for cask ale, two draught ciders and selection of bottled beers from around the globe about to be joined by two specialist craft beer pumps.

Dan, 30, said: “Our dad Terry brought us up on the real ale scene and we’ve always been into good beer, and we were on holiday last year in a lovely little pub in Cornwall and I thought we could do that.

“The main focus of the pub is buying local and having everything from small, independent breweries. We want to offer people things they won’t get in any other pub on the high street.

“To get a CAMRA award is a really good boost because it lets us know all the decision we’ve made have gone well. Hopefully we can now keep up the good work and get into the Good Beer Guide, because that is the holy grail for us.”

The Firkin, which is located in a former car parts shop, is one of a growing number of microbars and micropubs giving traditional pubs a run for their money in attracting those serious about enjoying good ales and meeting like-minded people.

Dan says the bar’s modern look has attracted a varied clientele keen to try out the real ale scene in a different environment to a more established watering hole.

He said: “I’m not a fan of going for drinks and having loud banging music and gambling machines.

“Here you have to come and talk to each other. There’s no TV and no music, just beer and good company, and people seem to like that. 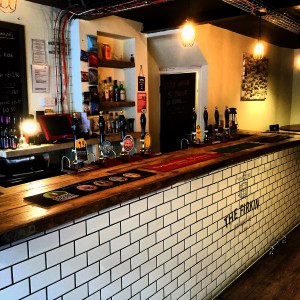 In case you missed it earlier in the year we made the St. Helens Star…

THREE men are fulfilling a long-held dream after creating their very own family pub.

In an era when pub closures are becoming the norm, The Firkin, in Newton-le-Willows, is bucking the trend, since opening for business at the end of October.
Brothers Phil and Daniel Cunliffe, along with dad Terry, had for years dreamt of having their own pub but that became reality when they converted a shop on High Street, in the heart of Newton.
“We have never done anything like this before, and the idea came to me and my brother earlier in the year while visiting a fantastic small pub in Penzance, Cornwall called The Crown,” says Phil, 27 who is the pub’s director, working alongside Daniel and Terry.

He added: “It has been a dream for years but we really only got serious about the idea earlier this year.

“We have all lived in Newton for more than 25 years. The pub has been a massive hit since we opened at the end of October and we have seen people from far and wide visit us. 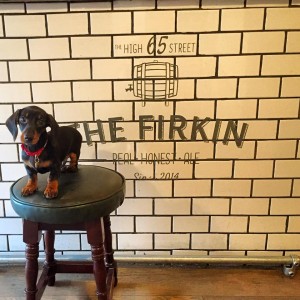 Even dogs love ‘The Firkin’

“It has been busy, no two days are the same and a lot of hard work goes on behind the scenes to make sure the end product is perfect!”

Phil, who gave up his job in sales to run the Firkin full time, describes the new pub as a “small, friendly family run venue with a great sense of humour”.

He added: “We specialise in real ale and craft beer. No two weeks are ever the same as the beers change every week to keep it varied and fresh.”

‘Small in size but big in attitude this microbar in Newton-le-Willows is a great place to find a well kept cider!’

Here at The Firkin we try and have two constantly changing two REAL ciders, from up and down the country.

So if you are a cider fan, rest assure you are in safe hands!

One of popular cider providers.